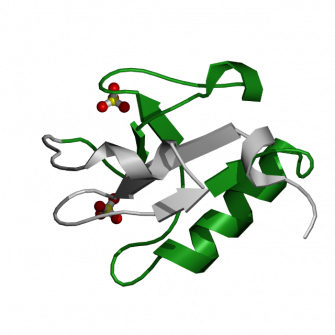 Pfam
When I used Pfam the DCDC2 protein sequence resulted in the protein map shown above. The domains shown above are consider to be significant in the Pfam search. The green domain represents DCDC2 N-terminus of proteins DCX which has an e-value of 4.5e-27 and 2e-17 for the first and second domains respectively. These one or two tandemly repeated copies are around the 80 amino acid region (2). The region has been suggested to bind to the first DC domain of doublecrotin binding tubulins, which enhaces microtubule polymerization(2). These two binding domains are said to be a part of the biological process: "intracellular signaling cascade". There were three other proteins brought up in the search, but each was declared as insignificant.

PRINTS
PRINTS did not return any results when I did a sequence search in the database.

I found that almost all of the search engines returned that the two domains found in DCDC2 were DCX . I liked the SMART protein analysis database the best as it was easy to follow and understand. It provided a good visual image, a good written description of the DCDC2 gene, and described related protein interaction. In addition, Pfam also had good visualizations of where these domains were located and a good protein image. I liked the databases that had better visualizations rather than just presenting the written word.

The MOTIF and and PRINTS database did not return any protein domains.

As one can see, the low complexity regions differ the most from animal to animal. Low complexity regions are regions of biased sequence composition. These regions tend to be comprised of different types of repeats and  have been shown to be functionally important in some proteins. However, these regions are not well understood and are masked out to focus on globular domains within the protein domains. As one can see, there is also an area of coiled coil region located in the DCDC2 gene homolog in a mouse, which I find interesting since it is the only one.