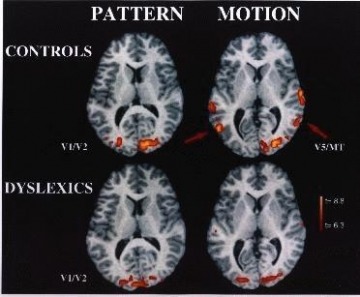 Figure 1. fMRI Scan of the brain in a dyslexic and non-dyslexic
Dyslexia is predicted to affect 15-20% of the population as a whole according to recent statistics from 2008 (6). Dyslexia is generally referred to as an inherited, language-based learning disability(3). It is called a learning disability (LD) since it can make academic success very difficult to achieve at any level of education(3). It is often known as a neurologically-based disorder because brain and anatomical images show differences in the development and functions in the brain of a dyslexic person compared to the brain of a non-dyslexic person(2). For a dyslexic individual, inactivity of specific areas of his or her brain's visual system can be depicted in fMRI technology through simulated motion when exposed to a series of moving dots (figure 1)(2). This level of inactivity is relative to the normal response of the brain in a non-dyslexic individual where a higher level of activity in the control subjects occurs when confronted with the tasks of tracking and processing motion(2). Dyslexia can also interfere with the ability to process language, either written or spoken(6). The severity of dyslexia often varies from person to person, which is one of the reasons it makes it difficult to study the inheritability behind it. One of the common misconceptions about dyslexia is that it is a visual scrambling of letters and words(6). This scrambling of letters and words does often occur in dyslexics when there are in elementary school; however, they have a tendency to grow out of it. This stereotype only continues in a small percentage of adults.

Currently, most researchers and psychologists like to refer to dyslexia as a reading disability that refers to a weakness in the part of the brain that decodes the sounds of written language. This is due to difficulties a dyslexic person experiences when first learning to read; it takes a lot of effort because one is learning the words through sounding them out(5). The region of the brain that controls initial reading ability sits above the left ear, at the junction of the the temporal and parietal lobes(5). This area often lights up brightly on brain scans for readers who are not dyslexic when they are sounding out words. In poorer readers, such as dyslexics, this region of the brain is much less active(5). As a reader becomes more and more skilled, an area further back in the brain, next to the visual processing area known as the occipito-temporal starts to show greater activity(5). This is known as the "word form" area since readers start to learn more and more words on sight without actually having to sound them out(5). It takes on an even greater share of the reading task because of the repetition that occurs in reading a certain word over and over again(5). This causes a number of nerve endings to come together and store the word in this area. However, in many adults with dyslexia, this word-form area stays largely dormant leaving every word a puzzle that needs to be unraveled.

Thus, adults or children will have difficulty with language skills that would be emphasized in reading, learning to speak, pronouncing words, foreign language, writing, spelling, handwriting and sometimes memorizing number facts, rapid visual-verbal responding, organizing written and spoken language, and sometimes arithmetic such as doing math operations(6). This often occurs due to problems in the phonological processing, expressive language, and receptive language regions within the brain(6). These problems that occur in dyslexic people can sometimes be difficult to recognize since these people are often times very bright. This means problems can occur in school, the workplace, and in relationships, as dyslexia's effects extend beyond the classroom. In addition, a person's self-image is affected by dyslexia. A person who is a student and has dyslexia can often end up feeling less capable than they actually are and feeling "dumb"(6). The frustration and stress associated with dyslexia that is accompanied by academic problems will often times lead dyslexic students to become discouraged about continuing school(6). It is not because they lack intelligence, motivation, desire to learn, adequate instruction or education, sensory impairment, or lack of opportunities(6). This is why it is important to study dyslexia and understand its inheritability, since the exact genetic causes of dyslexia are not completely clear and much remains unknown.
References:
Gonczy, P et al (2001).Zyg-8, a Gene Required for Spindle Positioning in C. elegans, Encodes a Doublecortin-Related Kinase that Promotes Microtubule Assembly. Developmental Cell. 1,363–375. 1
Johannes, Marc (February 1 2001). Functional Brain Mapping.. May 15 2009 from http://www.lems.brown.edu/~msj/summary /summary.html. 2
Meng, H et al. (2005) DCDC2 is associated with the reading disability and modulates neuronal development in the brain. PNAS. 102(47), 17053-17058. 3
Reiner, O et al. (2006). The evolving doublecortin (DCX) superfamily. BMC Genomics. 7(188) Retrieved from http://www.biomedcentral.com/1471-2164/7/188. 4
Roth, Mark (2007). Dyslexia begins when the wires don't meet. Post-Gazette. Retrieved May 15 2009 from http://www.post-gazette.com/pg/07042/760823-114.stm. 5
The International Dyslexia Association. (2008). Dyslexia Basics. IDA. Retrieved May 15, 2008 from http://www.interdys.org/ewebeditpro5/upload/Basics_Fact_Sheet_5-08-08.pdf 6
STRING 7
Images:
( Figure 4)The Pattern and Motion Image Retrieved on 2/1/09 from http://www.lems.brown.edu/~msj/summary/summary.html by
Marc Johannes  in Medical Imaging February 1, 2001.
Megan Holler
mholler@wisc.edu
Last Updated: 2/2/09