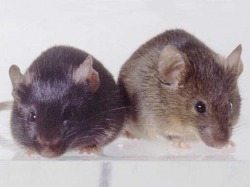 Figure 1. Mice
It appears that the role of DCDC2 remains much a mystery. The two papers I mentioned in the results area seem to me to be key in figuring out the further direction of studying the DCDC2 gene and protein. The next direction I would take would involve looking at neurons within a dyslexic mouse model. This is because the gene Zyg-8 has two domains instead of one that are similar to the two domain of the DCDC2 gene. This leads me to believe that DCDC2 needs to be studied looking closer at the ubiquitous expression and the localized expression since these two genes seem to have very similar characteristics. Since Zyg-8 mutant gene shows shortened microtubules. I would like to analyze microtubles within neurons of a dyslexic mouse model. Neurons are known to have microtublules, neurofilaments, and microfilaments whichh compose the cytoskeletal elements of a neuron. The cytoskeletal elements are synthesized in the cell body of a neuron, but are delivered throughout the length of the neuron's axon where they form large molecular assemblies or matrices. Within mammalian peripheral neurons, the neurofilament protein content decreases by almost 2-fold distally away from the cell body while microtubule content increases moving toward the cell body. The neurofilament also increases the caliber of the axon underlying myelinated segments of normal neurons. The molecules of tubulin may be in two different states: extended or contracted. These shortened microtubules could be the molecular function explaining why communication back and forth between the brain circuits is less active or explaining improper development of the reading centers. I found it interesting that so far most papers talking about DCDC2 do not mention this detail. They mostly focused on how proper communication is inhibited or development does not occur, but they do not know the reason being this inhibition. DCDC2 localized expression appears to be the most important aspect in studying DCDC2 so far. I will agree that this gene plays an important role in early embryonic development and it is necessary to understand both expression levels better since it could be expressed ubiquitously at low levels throughout while expressed at a higher concentration level locally. In addition, if the microtubules are shown to be shortened through doing a FISH analysis it would be interesting to see why it is not lethal within mammalian as compared to the Zyg-8 gene. In addition it would interesting to see if DCDC2 is a MAP within the human model or mouse model. A micro array could be done for DCDC2 expression with other protein within a dyslexic and non-dyslexic person while comparing the results to see if any proteins are up-regulated or down-regulated. Finally, it would be also be interesting to draw and complete the connections between the DCDC2 interaction and the other dyslexia genes.